Under fire on a dangerous Somali road

One of the most dangerous roads in Somalia has become a battleground between African Union (Amisom) troops and Islamist al-Shabab insurgents. The BBC’s International Development Correspondent, Mark Doyle, travelled with a convoy that was hit by two roadside bombs.

The explosion, when it came, was deafening.

I was totally unprepared for it.

The Ugandan soldiers protecting me, however, reacted fast.

It was a roadside bomb.

The vehicle behind us in our long, armoured convoy of Ugandan African Union troops and supplies had been hit.

As I fumbled for recording equipment in the stifling heat of the armoured personnel carrier I was travelling in, the three Ugandan gunners did their job.

With their heads poking through the holes in the roof above me, the Ugandans let rip into the surrounding bush with repeated bursts of heavy machine gun fire.

The guns spewed hot, empty cartridges the length of a biro and the circumference of a water pipe.

As they rained down on my lap I brushed them off to stop being burnt.

A deep ‘”boom, boom, boom” reverberated around the cabin of the armoured vehicle.

We were on the stretch of road between Balle Dogleh and the next village, Lego – one of the most dangerous parts of Somalia. 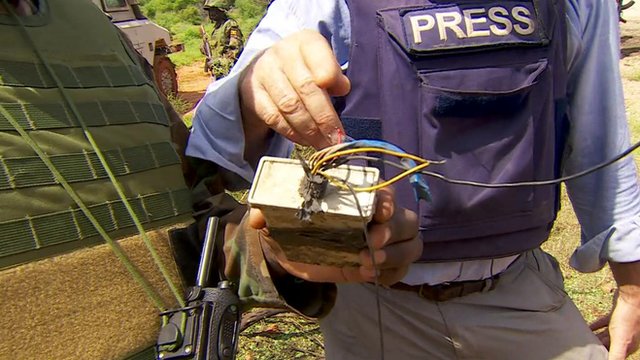 Amisom first arrived in Somalia to fight the Islamist al-Shabab in 2007. After four years of house-to-house battles it pushed al-Shabab out of Mogadishu.

Gradually, the African Union force – in this area mainly Ugandans with Burundian support – then moved north, taking strategic points including Afgoye and Baidoa. The village of Gof Gudud, south-west of Baidoa, is still being fought over.

The next village, Manaas, is still de facto controlled by al-Shabab.

My litmus test of a dangerous place is if there are no civilians there; they sensibly left long ago.

The stretch of road between Balle Dogleh and Lego is fertile. But there are no farmers here – only overgrown bush.

The obvious reason is that it is a battleground between al-Shabab and African Union forces.

Amisom is not a “peacekeeping force” as African Union diplomats and the Westerners who finance it sometimes like to imply.

There is no peace to keep in Somalia.

Amisom’s clear military aim is to stop the al-Qaeda-linked al-Shabab from overthrowing the government in Mogadishu and creating an anti-Western caliphate.

It has a mandate from the United Nations and is mainly financed (and backed, with drone surveillance teams and other military advisers) by the United States.

The government of Somalia is weak and divided; it does not have an effective army.

A well-informed Somali observer in Mogadishu said “if Amisom withdrew al-Shabab would take over in minutes – maximum one hour”.

When I put this analysis to senior Amisom officers they said little. They were too diplomatic to agree “on the record”.

Al-Shabab is a powerful, resilient, and well-armed organisation.

It is one of the few radical Islamist movements worldwide, post-Taliban, to control significant territory. It runs vast swathes of southern and central Somalia.

In the areas they control al-Shabab are unpopular because they ban TV, for example, and enforce strict Sharia (Islamic law).

Nevertheless they can capitalise on the lack of decent government from Mogadishu.

No-one should doubt the scale of the war in Somalia.

On this trip I have been to a dozen Amisom front line bases across the country. 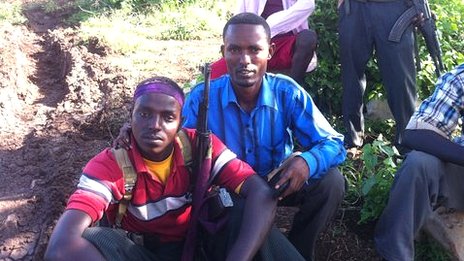 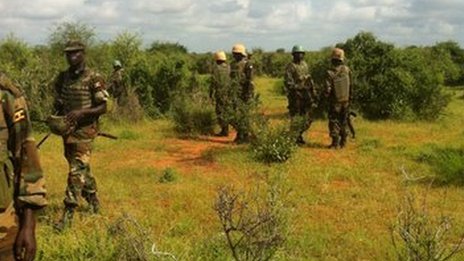 I should not have been surprised by the roadside bomb attack described at the start of this article.

The day before, the convoy I was in was hit by another bomb.

And during the intervening night the dark Somali sky was full of the sounds of an al-Shabab attack on an Amisom base next to the one I was sleeping in, near Lego.

AK-47 rifles and light machine guns rattled away for several minutes during that attack.

Al-Shabab At A Glance 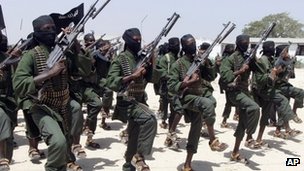 The next day I visited the scene. Between 15 and 20 al-Shabab fighters had advanced in attack formation against the base but were repelled.

The Ugandans said none of their men or women were badly hurt in these multiple attacks.

Amisom has made progress against al-Shabab in recent years but is now stalled because its enemy is powerful.

“We have very few armoured vehicles to escort the troops and to move logistics,” Brigadier General Dick Olum, commander of the lead Ugandan troops, told me.

“We also need helicopters for medical evacuation and to move commanders around the battlefield,” he said.

“Finally, we need attack helicopters that will strike at al-Shabab locations.”

In the four days that I was travelling north from Mogadishu to Baidoa there were at least five serious clashes across Somalia.

In isolation, none of these attacks would probably have been reported by mainstream media.

But put together and confirmed, they illustrate the widespread and deadly nature of a war which is far from over.