A terror suspect who changed into a burka to escape surveillance is suing the government over allegations of torture abroad, it has emerged. 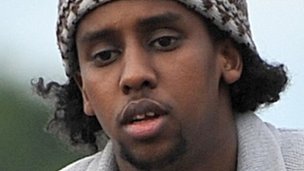 Mohammed Ahmed Mohamed, 27, who was subject to an order which restricted his movements, left a London mosque in disguise on Friday.

Police were alerted when the tag was tampered with but Mr Mohamed fled.

It has now been revealed that Mr Mohamed is seeking compensation at the High Court.

Mr Mohamed, a British citizen, claims the UK authorities were complicit in his torture in Somalia, East Africa, in 2011.

He travelled to Somalia in 2007 and was detained there with another man – a fellow British citizen known only as CF – in January 2011 until their removal back to the UK in March of that year.

Both men allege that they were tortured during their detention and that UK authorities were complicit in their ill-treatment.

Mr Justice Irwin, sitting at London’s High Court on Thursday, handed down an interim ruling in the action Mr Mohamed is bringing for compensation – the first ruling on the use of the Justice and Security Act 2013 in a civil claim for damages.

His human rights claim is against the Foreign Office, Home Office, Ministry of Defence and the Attorney General.

It was initially anonymous, but that has been lifted following his disappearance.

In a statement, the Foreign Office said it welcomed the High Court ruling, saying its application had been successful.

“As this is an ongoing litigation we are unable to comment on the details of the case,” it added.

Mr Mohamed is believed to have close links to al-Shabab, the Somali insurgent group that raided Nairobi’s Westgate shopping mall in September, resulting in 67 deaths, but officials said there was not enough evidence to bring a criminal case against him in court.

He has been under a terrorism prevention and investigation measures order (TPim) for almost two years.

TPims restrict the movements of people thought to pose a risk to the public, but who cannot be tried for reasons of national security and who cannot be deported.

Concerns have also been raised that Mr Mohamed may have a second passport after confusion emerged over his British one.

Home Secretary Theresa May told MPs on Monday that officers had seized the 27-year-old’s British passport, but has since revealed that this was wrong.

Correcting a comment saying the police had Mr Mohamed’s passport on Monday, Mrs May asked for the parliamentary record to be corrected to say: “I do not have his passport. Mohamed was not in possession of his British passport when he returned to the UK so there was no passport for the police to seize.”

The Press Association reported that Mr Mohamed’s British passport had been cancelled before his return to the UK. The Home Office would not confirm when it was cancelled.

The chairman of the Home Affairs Committee, Keith Vaz, said he was “amazed” by Mrs May’s incorrect statement. He said when there were only eight people on TPims in the UK and the government ought to know every detail about them.

“It could well be that Mohamed has another passport and her answer has raised questions about his current whereabouts. We will be raising these questions with Charles Farr (director general of the Office for Security and Counter-Terrorism) when he comes before the committee next Tuesday,” she said.

The BBC’s Security Correspondent Frank Gardner said Mr Mohamed was likely to be under MI5 surveillance when he went on the run after entering the An-Noor Masjid and Community Centre, in west London, on Friday.

When he cut off the tag, imposed under the terms of the TPim, it issued a “tamper-alert” to its makers, private security firm G4S.

They rang the suspect and contacted the Home Office after he failed to answer. Police were alerted but he had disappeared by the time they arrived.

Mr Mohamed’s restrictive surveillance regime, which included a 21:30 GMT curfew, was due to expire by January.

He is now the subject of a police-led manhunt and could face up to five years in prison if caught.

The Met Police’s Counter Terrorism Command, MI5 and the UK’s Border Force have joined forces to find him.

He is the second terror suspect under a TPim order to go missing.

When asked if Mr Magag had been found, the Home Office said: “We wouldn’t comment on ongoing police investigations.”

As of September, nine men – eight of them British – were under TPim surveillance.

Original article written by and sourced from – bbc.co.uk