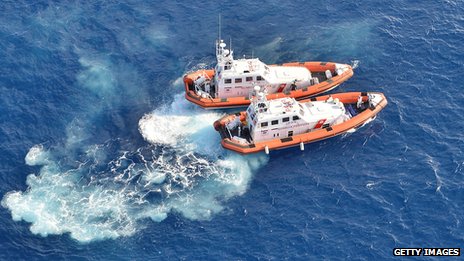 The European Parliament has voted to launch an EU maritime surveillance system aimed at preventing migrant disasters like the Lampedusa shipwreck.

The Eurosur data exchange should speed up the EU response to boats packed with migrants heading for Europe.

The plan is to launch Eurosur in December, covering the Mediterranean. More countries will join a year later.

The vote was planned long before last week’s Lampedusa disaster, in which more than 300 African migrants died.

Eurosur participants will be able to share real-time images and data on developments at the EU’s external borders.

The main aim is to improve the detection, prevention and combating of irregular immigration and cross-border crime.

MEPs insisted that it must also be used to help save migrants’ lives, by alerting emergency services.

And on Wednesday the European Commission – the EU’s executive – pledged 30m euros of EU funds to help refugees in Italy.

“Only by having a pan-European border surveillance system we can prevent the Mediterranean from becoming a graveyard for refugees trying to cross it in unseaworthy small boats in search of a better life in Europe,” said the parliament’s lead negotiator on Eurosur, Dutch liberal MEP Jan Mulder.

“To prevent a tragedy like that off Lampedusa from happening again, rapid intervention is necessary,” he said.

Eurosur members will be obliged to observe the international legal principle of “non-refoulement” – meaning that people fleeing conflict or persecution are not sent back to a life-threatening place.

In future the EU hopes to expand Eurosur to cover not only boat traffic in the Mediterranean, but also local weather and the marine environment. The surveillance will also cover Atlantic waters south of Spain’s Canary Islands and the Black Sea in Eastern Europe.

Of more than 500 people who had been on board the boat near Lampedusa, mostly migrants from Eritrea and Somalia, only 155 survived.

The sinking is one of Italy’s worst disasters involving a boat carrying Europe-bound migrants from Africa.

The tiny island of Lampedusa is a key destination for such boats and many residents have long complained that officials in Italy and the EU are not doing enough to deal with the thousands of migrants who come ashore each year.

Why people flee Eritrea and Somalia